What to Make of This Year’s Sweet 16 (Preview) 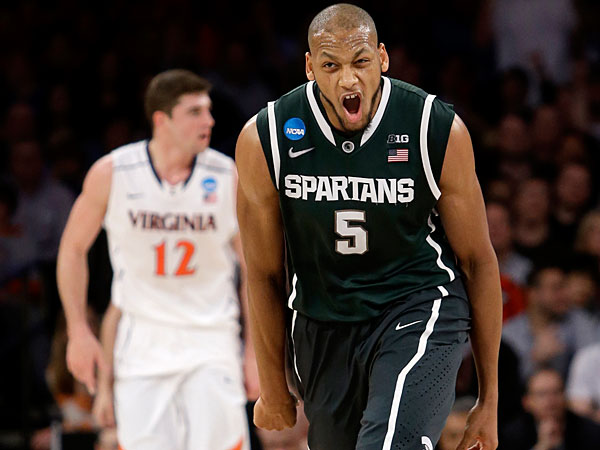 Well, that was a pretty awesome four days, from watching UAB upset big 12 champion Iowa State on Thursday to watching what is sure to be the most painful game in this year’s tournament, the dreadfully slow Michigan State vs Virginia matchup.  My bracket is yet to be fully busted (all my final four teams remain), so you could call me a guru at this point.  Here are my previews for each Sweet Sixteen contest (Winners in bold):

West Virginia is balling right now, but they are not the type of team to beat Kentucky.  So far in the tournament they are 12/35 from deep.  Unless the catch fire and shoot significantly better, it is hard to see them advancing.  Aaron Harrison, Andrew Harrison and Tyler Ulis should have an easier time bringing the ball up the court than Maryland did both before and after Melo Trimble went down.

If you read my previous March Madness article you know I love the shockers.  And so far, they are making me look smart.  Fred VanVleet is torching defenses right now with 44 points through two games.  The shockers went 10/20 from deep against Kansas in the round of 32, and if they keep shooting lights out they could even challenge Kentucky in the elite eight.  Notre Dame, on the other hand, has barely survived the first two rounds, winning their two games by a combined seven points.  Ron Baker will show why he deserves to be a first round draft pick come June by limiting Jerian Grant’s effectiveness.

Kennedy Meeks will likely be out for this matchup, and that does not bode well for the Tar Heels.  Less bodies down low is never a good thing when going up against POY front runner Frank Kaminsky.  Josh Gasser should be able to handle Marcus Paige more effectively than he defended Joseph Young this past Sunday, and the Badgers will advance.

Arizona is playing some of the best ball in the country right now, and Xavier will not be able to slow them down.  After dismantling 15 seed Texas Southern in the opening round, the Wildcats easily handled dangerous 10 seed Ohio State, winning by 15 points.  Xavier needs big man Matt Stainbrook (their leading scorer) to have an excellent game to have a chance, but after scoring only nine points against 14 seed Georgia State it is tough to see him having a field day against Arizona bigs Kaleb Tarczewski and Brandon Ashley.  Also watch out for Arizona senior guard T.J Mcconnell who has now scored double digit points in six straight as his college career nears its finale.

I must admit I picked Louisville to drop their first round matchup against UC Irvine.  I have now learned not to bet against Pitino and the cardinals in madness.  NC State won the lone matchup between the two in ACC play, but this time Terry Rozier will pick up right where he left off against UNI and Montrezl Harrell will be a force down low.

Michigan State prides themselves on their defense, and after beating Virginia, a team widely considered as the best defensive team not named Kentucky, it is hard to imagine the spartans falling to Oklahoma.  Containing Buddy Hield will be key for Michigan State, and Denzel Valentine will need to stay out of foul trouble and be on the court far more than he was last game.

Utah will need big man Jakob Poetl to limit Jahlil Okafor’s effectiveness in the paint, which will be extremely difficult if he picks up four fouls and only plays 18 minutes like he did in the round of 32.  Delon Wright has the skill to play with Duke’s guards, but in the end Duke’s overall talent level will lead them to victory.

The Bruins certainly did not deserve to make the field of 68, and they advanced to the sweet 16 off of a very questionable goaltending call and a win over a lowly fourteen seed.  Meanwhile, the bulldogs have been absolutely decimating their opponents.  They will advance to face Duke in what is sure to be an incredible elite eight matchup.