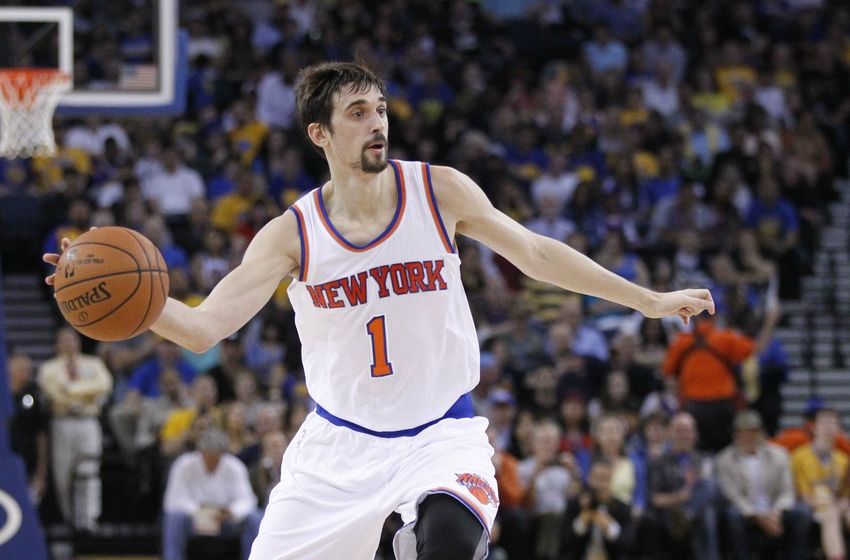 Alexey Shved (7,000): Coming out of no where, the Russian guard has exploded in Fanduel value, averaging an unbelievable 36.5 FPPG (Fanduel Points Per Game), over the last five games. I will continue to ride the Shved train until the wheels fall off. Coming off of an astounding 40.1 Fanduel Point game against the defending champions, San Antonio Spurs, Shved has a very favorable matchup with the Minnesota Timberwolves. On the season, the Timberwolves have been the 3rd worst team against opposing point guards, giving up an average of 42.1 FPPG, and have been the 2nd worst team over the past five games, giving up a monstrous 50.2 FPPG. I am looking for the 6’6 guard to have another big game tonight.

Ricky Rubio (7,500): Thursday’s slate of games is very, very weak in terms of the Point Guard position, with the top play being Tyreke Evans. Rubio has returned from his two game absence from an ankle injury, and ironically has a favorable matchup up against the Knicks. Like Rubio’s team, New York does not guard the Point Guard position all too well, giving up 46.2 FPPG over the last five games and 40.3 on the season. Getting back to his usual amount of minutes, Rubio will go back to what he knows, stuffing the stat sheet. What better team to come back to form against than the Knicks? Rubio should be able to take advantage of this matchup to be well-worth his value.

*Risk Play* Jameer Nelson (5,500): Over the last three games, the veteran has hit, and passed, his value while averaging 31.4 FPPG. With Ty Lawson starting in one of those three games, Nelson has recorded around 36 minutes a game. While he seems to be getting minutes and playing well, even when Lawson is in the lineup, he seems to be walking into a stellar defense with the Rockets, which is the reason for him being the risk play of the night. Based on Lawson’s fluctuating minutes and Nelson’s bump in minutes, I believe he will put up another good line against Houston.

Eric Bledsoe (8,500): I do believe that Eric Bledsoe is the play rather than James Harden tonight. Bledsoe has a good matchup against the Pelicans who have given opposing Shooting Guards 38 FPPG the last five games. I believe this game will be close till the end so he should see his usually collection of minutes being from the mid to high 30’s. Phoenix still has a chance for a playoff push, so look for the go to man to be Bledsoe as he will carry the load, giving you a great Shooting Guard 1 play.

Eric Gordon (6,000): Just like Point Guards, the Shooting Guard position is pretty limiting. My decision to go with Gordon is because of his consistently lately. Over a slate of six games, he has not scored under 23.5 FPPG. While you may be saying “Well that’s not worth his salary” you may be right, but we know what we are getting with Gordon. He will give us a respectable 24+ Fanduel Point game and we can live with that, because of the money we are saving in the salary cap. He is not a sleeper pick, but he is a player who could very well hit value which is why he will be my second Shooting Guard for the night.

*Risk Play* Randy Foye (4,600): If you don’t trust the pick of Eric Gordon and are looking to go cheaper, yet riskier, Randy Foye is your man. Like his teammate, Jameer Nelson, Foye has been getting a larger role on the Nuggets. Even with his rise in minutes, he is still putting up some shaky, inconsistent numbers. In his last five games played, he has two games of 17 Fanduel Points, while the others being 29.1, 38.6, and 35.9. Houston doesn’t guard Shooting Guards as well as they do Point Guards, giving opposing SG’s 39.5 Fanduel Points over the last five games. With James Harden being known to be lackadaisical on defense and Foye’s recent play, I see Foye being a stealthy pick with a big upside at a low price.

Rodney Hood (4,600): My man Rodney Hood. Playing him in his explosion on March 16th with 24 points, 3 assists, 3 rebounds, and 1 steal, he helped my lineup score 331 Fanduel Points. The former Blue Devil has a spot in the starting line up and it is set in stone. He has been getting quality minutes and proving himself fantasy wise, by hitting his value and giving his owners great play. He has a great  matchup against the Lakers who have been allowing 38.8 FPPG over the last five games to opposing Small Forwards, which makes him a clear play in tonight’s games.

Trevor Ariza (5,800)/Corey Brewer (5,400): Just take your pick with these two. Both are Small Forwards, both on Houston, and both are playing great lately. Over the last five games, both Ariza and Brewer have scored at least 30 Fanduel Points in four out of those five games. They are both poised to have another 30+ Fanduel Point game as they face the Los Angeles Lakers, who have given up nearly 40 FPPG over the last five games. Again, it’s really up to you on which one of the dynamic duo you want. I am going with Ariza simply because he gets more minutes.

*Risk Play* Quincy Pondexter (4,100): If you’re looking for a player with a low salary to hit value so you can use your saved money for later, add Pondexter to your lineups. He has been getting pretty consistent minutes typically hovering around 30, with an exception for his 18 minute dud. In his last five games, he has hit 20 Fanduel Points 3 times. He will continue to see an increased role with Ryan Andersen being out with an injury, so if you are feeling risky, here’s your guy.

Kenneth Faried (6,900): Before being held from the meeting against Memphis, Faried was playing like the Manimal that he is known to be. Posting six double-doubles in six of his last eight games he played in, Faried will look to throw another one into the mix. Playing a weak Houston front court, who have given 46 FPPG to opposing Power Forwards in the last 10 games, it seems as though Faried will give his owners a great line. While Dwight Howard is still out with injury, there are more rebounds to be taken and less of a presence down low, giving the athletic forward a great opportunity to dominate the game.

Marcus Morris (5,200): Yes, this is the other Morris twin, not Markieff. Ever since March started, Marcus has gotten a chance to play alongside his brother with the Suns, and once he received a big boost in minutes, Marcus really started to play well. Priced at only 5,200, I believe that he is a good play to get you around mid to high 20’s in Fanduel Points. With the attention focused on his brother, the Kansas product could be given another opportunity to prove his worth in his matchup against the Pelicans.

Derrick Favors (7,700): I decided to add one more player to the Power Forward list. That man is Derrick Favors. He has just been on a dominant streak either putting up big scoring nights, or posting double-doubles, while consistently getting big minutes. Like I mentioned in Rodney Hood’s snippet, the Lakers are not too big on playing defense. Giving up a whopping 44 FPPG to Power Forwards, it is clear that Favors will be in for a very nice night, Fanduel wise.

*Risk Play* Adreian Payne (4,300): His Fanduel Points may not be an eye-opener, but all the pieces of the puzzle are there for the rook to be a nice play tonight against New York. Payne is just starting to get minutes now and has the size and skill to put up 25+ Fanduel Points, against a weaker New York front court. He’s not the safest play but use him if you are looking to have a superstar in your lineup tonight

Rudy Gobert (8,200): As Gobert’s price goes up, his production does as well. As of late, there is not much more from Rudy. With 25.1 Fanduel Points being the worst outing of this month, and not scoring under 30 Fanduel Points in any other game, the Frenchman should be on your roster if you can fit him in there. Over the last 10 games the Lakers, his opponent, have given up a ludacris 50.4 FPPG to centers. Those numbers are just ridiculous. With the Lakers already having a handful with the stockier and stronger big man, Derrick Favors, I see Gobert having his way with them as they go at it in Los Angeles.

Brandan Wright (5,200): With Alex Len, not looking like he will play, Wright will get another big night in terms of minutes. Last game, when he got 37 minutes against New York, he put up 18 points, 11 rebounds, 1 assist, and 1 steal, paving the way to a 34.7 Fanduel Point game. It looks as though he will receive the same amount of minutes in a great matchup against New Orleans. The Pelicans have allowed 47.1 FPPG to opposing centers over the last 10 games. Like Gobert, Wright is another long athletic center who could make this game his game.

*Risk Play* Jordan Hill (6,200): While you may question why he is the risk play of the day for centers when he is priced at 6,200, it is because he has been the epitome of inconsistency. He has the ability to go off and put up numbers like his last game of 15 points, 12 rebounds, 5 assists, and 3 steals, which resulted in a 41.9 Fanduel Game. Or he could throw in a dud, like he did two games ago, with 6 points, 9 rebounds, and 2 assists, leading to a 17.8 Fanduel Point game. Like all risk plays, if you’re looking to go cheaper and are feeling risky today, Jordan Hill is worth a look.