GGG vs. Canelo: Questioning the Legitimacy of Boxing

If you are a casual fan of boxing like myself, you probably enjoyed the Mayweather vs McGregor fight as it ended up being exactly what it promised—a spectacle. However, it was not a real fight, but rather an illusion of a boxing match. Throughout the entire fight Mayweather was in absolute control, dictating the pace of the fight and taking advantage of the ineptitude of McGregor’s inexperienced corner. For many, this fight was enough to satisfy their yearly interest for the sport of boxing. However, people more familiar with the sport were perpetually aware of an event far greater, looming in the horizon.

Canelo vs GGG (Gennady Gennadyevich Golovkin). A fight over which boxing fans all over the world had salivated for the past two years would finally come to fruition. Canelo, entering the fight with a record of 49-1-1 (34 KOs) was seen as the favorite by many. Canelo had made his mark in boxing by rising to the occasion. With his only loss coming from a masterclass by TBE (The Best Ever), Canelo has made a practice of answering his doubters throughout his career. Most recently, Canelo doled out a beating to Mexican legend Julio Cesar Chavez Jr. as an answer to those wondering who truly was the best Mexican fighter at the moment.

In the other corner, there was knockout artist and power-puncher GGG who was coming into the fight undefeated at 37-0-0 (33 KOs). Golovkin’s only ‘real’ test came in his previous bout against Lacob, in which Golovkin had to go the distance for the first time in his professional career. Golovkin would put his World Middleweight Title on the line to fight Canelo in the T-Mobile Arena in Las Vegas.

Both fighters had come up from very rough childhoods. Both fighters had never feared the man put before them, and this fight was no exception.  The drama was augmented by the history of the two fighters as well. Canelo, at the ripe age of 21, came to spar Golovkin at his Big Bear (CA) gym.

On the 16th of September, as the bell rang signifying the start of the fight, the surreal first round went by like a blur, many viewers’ minds occupied with only one thought: holy crap, I am actually watching this matchup. Canelo came out strong with the jab, taking round 1 and 2. However, beginning from round 3 and 4 GGG started landing much cleaner, more frequent jabs, seldom answered by Canelo. As the fight went on GGG got more and more confident, landing jabs and counter left-hooks. Often, GGG would operate from inside the pocket, with Canelo leaning on the ropes where he would often find himself in trouble. Canelo would continue to slow down as vintage GGG landed good hooks to the body and mounted increased pressure on a tiring Canelo. Watching the rounds go by, GGG looked the better fighter. 10-9, 10-9, 10-9… all for GGG. There would be times when Canelo would put up a forcefield, rendering himself untouchable to some of GGG’s punches. At other times, he would put up mesmerizing multi-punch combinations that only further ate into his quickly diminishing energy.

At no point did any fighter back down. In fact, in spite of Canelo’s efforts to turn up the heat in rounds 9 and 10, GGG would not stop coming, eating punches to the face, and hooks to the body. It became apparent the only way that Canelo could now win was with one big punch. His corner knew this too, urging him to get off of the ropes and fight the best rounds of his life for the final rounds. Canelo came back at the end of round 10 with a newfound energy, wobbling GGG after connecting with a right hand. Canelo would go on take round 11 and 12, providing for a true test of GGG’s granite chin. As the fight ended, too many there was a clear winner and only one score:116-112 in favor of GGG who had won every round besides the first two and the last two. There would be no shame in losing for Canelo. Both men had fought a true fight.

Yet when judges scores were announced, neither judge had this score. In fact, one judge hadgiven the bout a score of 118-110 in favor of Canelo, forcing the final decision into a draw. It was at this moment, that for the hundredth time all boxing fans thought: I am done with boxing. There is no better word but ‘ludicrous’ to describe this scoring decision. Looking at the final scorecard it is impossible to understand what Adalaide Byrd could have possibly been thinking. GGG landed almost twice as many jabs as Canelo, out punching him in total 218 to 169. There is no conclusion to come to besides the age old belief that boxing is a rigged sport. This fight decision certainly does not help to dispel the notion, as it seems that Golden Boy promotions founder Oscar De La Hoya seemingly have boughten yet another fight in favor of Canelo. 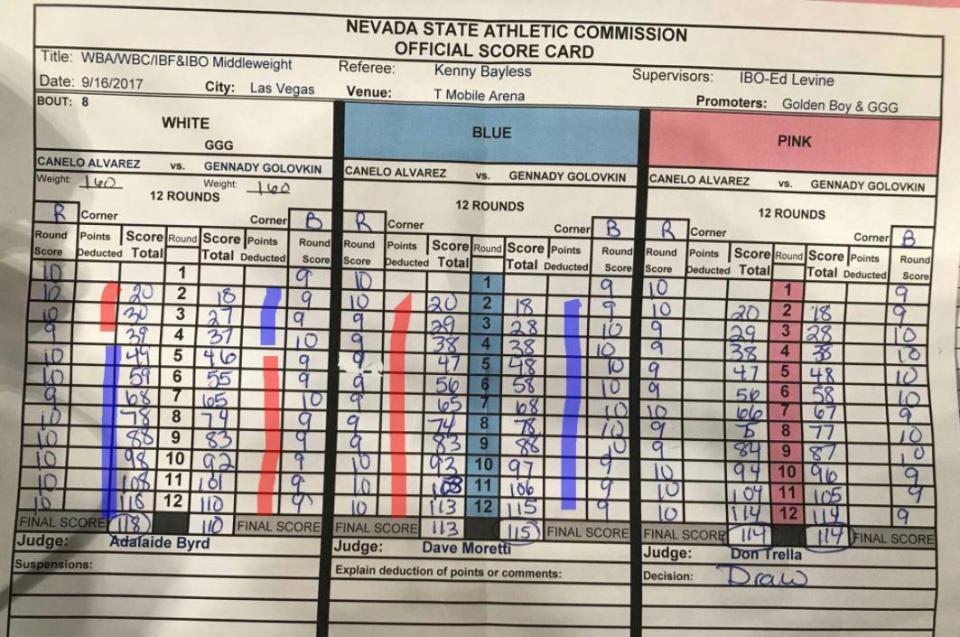 I am going on record to say this right now: Oscar is bribing every judge to protect his fighters. Despite a seemingly 12-0 schooling by Mayweather, one judge still scored the fight 114-114. In Canelo vs Lara, a very even and competitive fight, one judge gave the score of 117-111 in favor of Canelo. This fight is no exception. On top of this, some people observed that when Canelo does get the win, the scores are completely unrepresentative of the fight.  At times, scores such as 119-109 and 117-111 would be given out in favor of Canelo for fights that were actually quite close. The entire thing is rotten from top to bottom and the outrage is not sufficient. Boxing fans have become used to the way that their beloved sport is.

I can only be thankful that I do not care as deeply about such a subjective and corrupt of a sport as others may. To those not as fortunate as I, I beseech you: do not buy the rematch on pay-per-view. While the boxers may deserve our money, their promotion companies sure as hell do not.