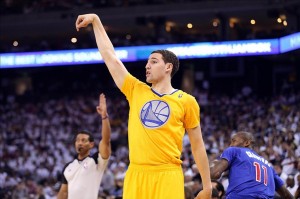 Friday Night. January 23rd, 2015. The Golden State Warriors, who held the NBA’s best record, hosted the Sacramento Kings, a sub-.500 team that boasted a very measly 6-15 away record. Should have been a routine, easy blowout win for the Warriors right?

To an extent, it was. Golden State cruised to a 126-101 game that will be forever remembered because of one man, and one quarter.

About ¼ in to the 3rd period, Sacramento held a slight advantage, 64-63. They had been playing tough, gutsy basketball, and were looking to upset a Warriors team that is nearly unbeatable at home. When the quarter ended, the Kings were down 24.

The guard had an NBA record 37 points in the 3rd quarter. Yes, 37 points. Most NBA players will go their entire careers without dropping 37 in an entire game, and Thompson did it in 12 minutes. He went 11-11 from the field, including 9-9 from three, and 2-2 from the line. He literally could not miss.

His performance was so staggering that, as teammate Draymond Green put it, “you don’t get that hot in 2K.” Klay Thompson wasn’t just good on Friday. He was game-sliders-on-99 good. He scored 37 of 41 points for the Warriors, and he also bagged 2 steals and an assists. He finished with 52 points, which is currently level with Minnesota Timberwolves guard Mo Williams for the highest scoring output of the aging NBA season.

Here it is. Watch for yourself: https://www.youtube.com/watch?v=Wxjsz92v53M

With performances like that, the Warriors are going to have to be considered championship contenders, maybe even title favorites, going into the Playoffs this Spring.

Have yourself a week, Klay.